The latest storm in a busy season is expected to strengthen into a hurricane and could reach Louisiana this weekend.,

By The New York Times

Tropical Storm Ida, the ninth named storm of the 2021 Atlantic hurricane season, formed in the Caribbean Sea on Thursday afternoon and could reach Louisiana over the weekend as a hurricane, the National Hurricane Center said.

As of 5:20 p.m., the storm was 100 miles west-southwest of Negril, Jamaica, the center said. It was moving northwest at 14 miles per hour, with maximum sustained winds of 40 m.p.h.

What is “landfall”? And what are you truly facing when you’re in the eye of the storm?

During hurricane season, news coverage and forecasts can include a host of confusing terms. Let’s take a look at what they mean ->

You may read about hurricanes, typhoons or cyclones. So what’s the difference? Location.

“Hurricane” is largely used in the North Atlantic and Northeast Pacific; “typhoon,” in the Northwest Pacific; and “cyclone” in the South Pacific and Indian Ocean.

The Atlantic season, when hurricanes and tropical storms are most likely to hit the U.S., runs from June 1 to Nov. 30.

Here’s what all these storms have in common: They’re low-pressure circular systems that form over warm waters. A system becomes a tropical storm when its winds exceed 39 miles an hour. At 74 miles an hour, it’s a hurricane.

Forecasters regularly talk about parts of the storm like the eye, the eyewall and the wall cloud:

Instead, landfall is when the eye crosses the shoreline.

Read more about the climate and the environment:

Forecasters warned that the storm could cause life-threatening flash flooding, mudslides and rip currents. 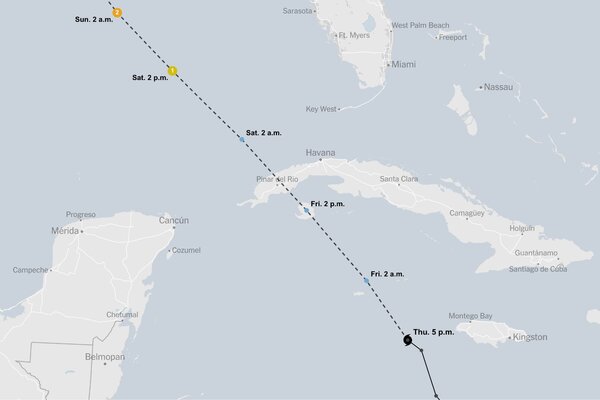 A map showing the storm’s route as it moves toward the Gulf Coast.

The eye of the storm could reach Louisiana by Sunday afternoon as a hurricane, with maximum winds of 110 m.p.h. and gusts of up to 130 m.p.h., according to the center’s tracking model.

It’s been a dizzying few weeks for meteorologists who monitored three named storms that formed in quick succession in the Atlantic, bringing stormy weather, flooding and damaging winds to different parts of the United States and the Caribbean. First came Tropical Storm Fred, which made landfall on Aug. 16 in the Florida Panhandle. As Fred moved across the southeast, it brought heavy rains and touched off several tornadoes. At least five people were killed after flash floods wiped out homes in Western North Carolina in the wake of the storm.

Grace formed in the eastern Caribbean on Aug. 14, the same day a 7.2 magnitude earthquake rocked Haiti’s western peninsula. The storm quickly moved west as the country struggled to free people trapped in rubble, dumping at least 10 inches of rain. Grace then made another landfall on the Yucatan Peninsula, bringing more heavy rain, power failures and hundreds of evacuations. Another landfall, on the eastern coast of Mexico’s mainland, left at least eight people dead.

And Henri formed on Aug. 16 as a tropical storm off the East Coast of the United States. It strengthened into a Category 1 hurricane but was downgraded before making landfall in Rhode Island, sparing the region the worst of what had been predicted. It thrashed the Northeast with fierce winds and torrential rain, knocking out power to more than 140,000 households from New Jersey to Maine. Some communities in Connecticut were evacuated and rainfall records in New York City were shattered.

The links between hurricanes and climate change are becoming more apparent. A warming planet can expect to see stronger hurricanes over time, and a higher incidence of the most powerful storms — though the overall number of storms could drop, because factors like stronger wind shear could keep weaker storms from forming.

Hurricanes are also becoming wetter because of more water vapor in the warmer atmosphere; scientists have suggested storms like Hurricane Harvey in 2017 produced far more rain than they would have without the human effects on climate. Also, rising sea levels are contributing to higher storm surge — the most destructive element of tropical cyclones.

A major United Nations climate report released in August warned that nations have delayed curbing their fossil-fuel emissions for so long that they can no longer stop global warming from intensifying over the next 30 years, leading to more frequent life-threatening heat waves and severe droughts. Tropical cyclones have likely become more intense over the past 40 years, the report said, a shift that cannot be explained by natural variability alone.

In May, scientists with the National Oceanic and Atmospheric Administration forecast that there would be 13 to 20 named storms this year, six to 10 of which would be hurricanes, and three to five major hurricanes of Category 3 or higher in the Atlantic. In early August, in a midseason update to the forecast, they continued to warn that this year’s hurricane season will be an above average one, suggesting a busy end to the season.

Matthew Rosencrans, of the National Oceanic and Atmospheric Administration, said that an updated forecast suggested that there would be 15 to 21 named storms, including seven to 10 hurricanes, by the end of the season on Nov. 30. Ida is the ninth named storm of 2021.

Last year, there were 30 named storms, including six major hurricanes, forcing meteorologists to exhaust the alphabet for the second time and move to using Greek letters.

Biden Meets With Manchin and Schumer to Iron Out Spending Bill